Matty Melgren is a convicted serial killer serving life without parole for the murders of several women in North London in the 1980s. He has consistently protested his innocence, and the evidence against him was largely circumstantial. So was he really guilty?

At the time of his arrest, Matty’s girlfriend, Amelia-Rose, is a single mum to her 12-year-old daughter Sophie. Matty had been a big part of their lives since they moved to London from Massachusetts a few years earlier, and Sophie adores him. He’s handsome, funny, respectable, and never in a million years would she or her mum suspect him capable of the brutal killings that are dominating the headlines.

Then a sketch of a suspect is released by the police that looks very much like Matty. As more women disappear, a pattern emerges – the victims all resemble Amelia-Rose, with dark, straight hair parted in the middle. It couldn’t really be him. Could it?

Whilst her mother starts drinking heavily, Sophie is consumed with doubt and a guilt that will cause her to act impulsively, ripping her family apart.

​Years later, Sophie is still haunted by her actions. Was she wrong to have done what she did all those years ago, or was she wrong not to have acted sooner? Then she receives a letter from Matty, telling her he’s dying and asking her to visit him in prison. Will she finally get the answers she needs to be able to re-claim her future? Answers that will come at a devastating cost…
GENRE
Crime; Thriller 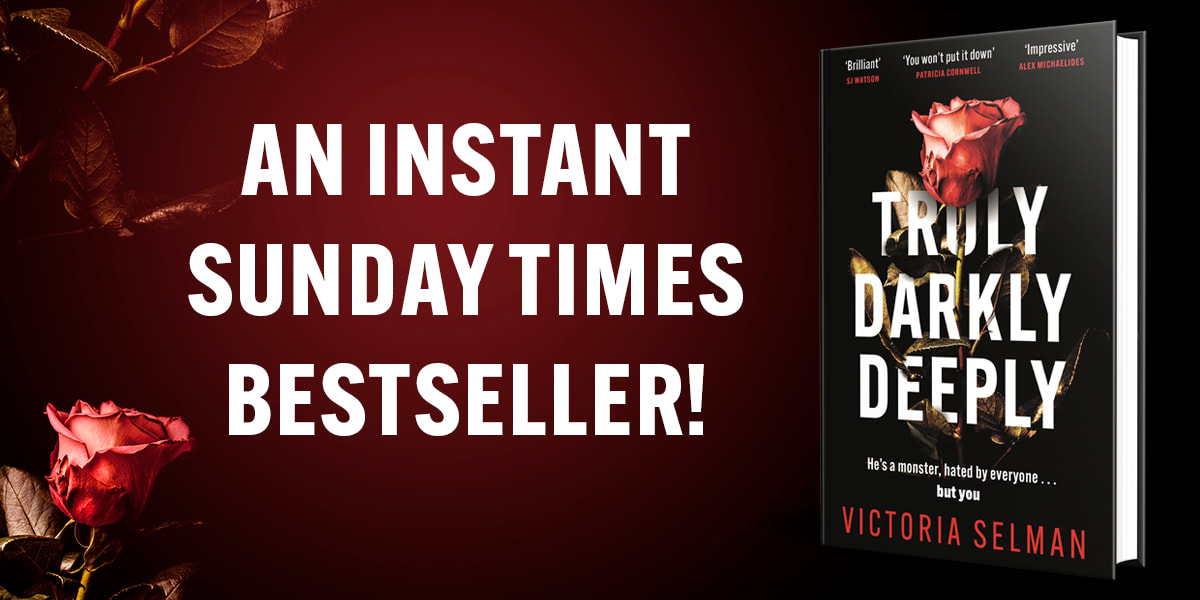 "This novel sits at the  pinnacle of suspense fiction! Truly Darkly Deeply draws us in from the very first chapter (well, before that, but you’ll have to read it to see what I mean!) and simply doesn’t let go. Rich with psychological insight, the book is populated with three-dimensional characters and offers up a pendulum of a plot that will keep you up all night. I intended to spend the weekend reading; I then had to figure out what to do with the rest of my Saturday and Sunday! This is one of those rare crime novels that will stay with you long after you turn the last page."
​Jeffrey Deaver

​"The accumulating tension is screwed tight in the ingeniously constructed narrative."
Financial Times

"Wow! Truly Darkly Deeply  is a beautifully written serial killer thriller with a creeping escalation of stone cold dread. Its roots in true crime, the story is so vivid and relatable I can't be certain I wasn't there.  Brilliantly executed."
Janice Hallett

"Twisty, intense and full of quiet menace – a story that draws you in and won’t let go until the final page."
​T. M. Logan

"First rate. Victoria Selman has written a smart, sophisticated and compelling mystery thriller about the effects of serial murder, both on the killer’s victims and, equally chilling, the ones he spares. The characters and situations absolutely ring true and she had me all the way."
Mark Olshaker

"Truly, Darkly, Deeply is a gripping, disturbing story. Victoria Selman is a beautiful writer, jumping between past and present seamlessly. This is the kind of book that will keep you up at night."
Samantha Downing

"Serial killer meets psychological thriller - and the result is nail-biting suspense with real humanity and depth. Her characters will stay with you long after you've raced to the final page."
JP Delaney

"A clever and addictive page-turner all wrapped up in a sensational story that felt so real!"
​Lauren North

"A clever and addictive is he?/isn’t he? psychological battle that will have readers absorbed from start to finish. I was sneaking in pages at every possible moment."
Will Carver

"I was hooked from the first page of this impressive thriller, and found it impossible to put down. Victoria Selman dives deep under the stereotype of serial killers to provide a complex analysis of innocence and guilt and the question of how well we know the people we love. Highly recommended."
​Alex Michaelides

"A twisted study of secrets and lies that is truly set to be huge."
Susi Holliday

"Truly, Darkly, Deeply is beautifully written and moves at the pace of wildfire. It draws you into the dark world of serial murder without celebrating it. Victoria Selman is an exciting and powerfully fresh literary voice, and her new thriller is one you won't put down."
Patricia Cornwell

"Truly, Darkly, Deeply is such a clever, immersive crime novel, and like nothing I’ve ever read before. I lived every unbearably tense second of Sophie’s powerful story, unable to put the book down. It’s only January and this could well be my book of the year!"
Caz Frear

"A twisty psychological thriller that goes to the heart of how and who we love. Can't wait to see what Selman does next!"
​Sarah Pinborough

"An all-consuming, beautifully drawn thriller about love and what it can drive us to do. Absolutely compulsive reading."
Gytha Lodge

"Utterly compelling. Twisted yet heartfelt. It's the stark portrayal of the complexities of familial love, and the slow burn of psychological authenticity that makes Truly Darkly Deeply such a thrilling read."
Ali Land

"An absorbing and captivating read, this held me in its thrall from beginning to end. Brilliant!"
S. J. Watson

"I raced through Truly Darkly Deeply in one breathless sitting. As soon as I’d finished I wanted to turn to the beginning and start again, knowingly what I now knew. Fiendishly clever and compulsive."
​Laura Marshall

"Original and clever - an incredibly tense read which pulled me inexorably along to its chilling denouement."
Harriet Tyce

"A creepy, engrossing novel which plunges the dark depths of a serial killer and his crimes. But also a meditation on memory, culpability and acceptance that gives a much-needed voice to the unspoken victims of heinous crimes. And with a properly surprising ending."
Araminta Hall

"A breathtakingly original novel, it’s an utterly absorbing twisted story and a strong contender for the thriller of 2022."
John Marrs

"Had me hooked from the start."
James Delargy

"No one knows serial killers like Selman."
Elle Croft

"Gripping from the opening page, it ratchets up the tension while constantly forcing the reader to question what they think they know. A compulsive and hugely satisfying read."
​Brian McGilloway

"Manages to be both a gripping as hell psychological thriller and a remarkably astute study of evil. A work of style and substance that leaves you with the uncomfortable suspicion that your world, and the people in it, are far more dangerous than you had imagined."
Dominic Nolan

"Truly, Darkly, Deeply is an ambitious story, told with remarkable skill. At once addictive and thoughtful, it is a rare novel that has the pathos of the finest thriller, the psychological insight of a true crime analysis, and the stylistic detail of the finest period piece. In shifting the narrative focus away from the serial killer and towards the largely unspoken victims - those who loved him - Victoria Selman has created something original, completely absorbing, and utterly persuasive. I was right there in eighties north London, held breathlessly in situe, right up until the final, shocking twist. Magnificent."
​Charlotte Philby

"Victoria Selman cuts straight to the heart of the thorniest of home truths — what happens when the one you love most is a killer. And with a similarly killer twist!"
​Sarah Sultoon

"This is a thriller that lives up to its title and then some - chilling and compulsive, and with a wicked twist. I loved it."
Cara Hunter